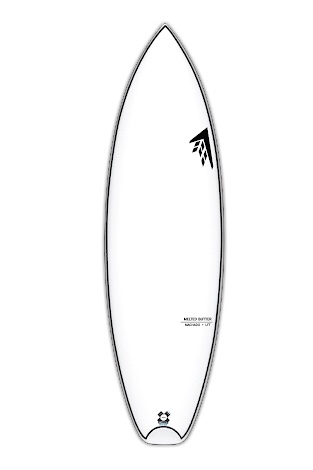 Welcome surf fans, it’s been a while since I’ve done a review as I’m trying to spend more time on the boards and studying them to better provide feed back and reviews for you all to read. One other thing I will start off by saying is today’s board I am reviewing is not going into production. Rob has since refind this design to something he prefers more called the Daily and by all reports it will be out in September this year.

The Melted Butter I have is 6’5 x 20 x 2 5/8 coming in at 39.5L like all of Robs new boards it has the board eat board bottom. The rocker is similar to it’s brother the Almond Butter with staged rocker through the centre, low entry through the nose and tail but had the same quick flip in the last 6 inches of the tail. The rails are more pinched helping them engage better in the face, it does only come as a thruster.

The sides panels also have a concave in them and a V that that runs with the side fin boxes. The centre channel is just one huge single concave with a V out the tail. The nose has very little concave at all.

The melted was born as Rob puts it for those who felt the Almond needed a 6th gear in bigger waves at 6’5 and only 20 wide it is very narrow compared to its length, looking at the Melteds outline it’s just simple nice and works, it’s got its wide point forward though it’s very subtle. Allowing it handle bigger steeper waves as the tail is also considerably more pulled in. The tail is almost a rounded squash, there is a noticed curve from point to point which will also help it hold in steeper faces. I have surfed the Melted in just about every type of wave up to double and half overhead and it’s worked well in all conditions, though it prefers chest high and up.

I’ve tired a few different fin sets from the large JJF to Freestone generation fin. As whole, like most of Robs board I’ve found it prefers the blackstix construction or Generation construction in all conditions. The extra yet controlled flex and inside foil of this construction by futures just really complements the Melted Butters rocker and concave. So I’ve mainly ridden it with the large Freestone Fin.

The melted performs really solid on rail and is a touch more performance oriented compared to the Almond. Until the Melted came along the Almond was my favourite Rob Machado board and in smaller waves it still is but when the waves get good I have no hesitation in grabbing the Melted it has not let me down once. I did take it out during TC Gita and it worked great though I was a little worried about snapping it at Kirra since it is the only one in Australia, I held back putting it into double overhead barrels, but at Greenmount it got me through some monster barrels with a softer roll in with ease. It’s super fast with the board eat board concave yet feels really engaged and stable, the melted moves well with out much pumping allowing you the rider to focus more on putting the board where you want on the wave without having to worry about loosing speed through turns. It’s almost like the board stays in sync with the wave never really putting you in the wrong place (though this may just be me).

It’s a really pity the Melted is not going into production as from what I understand the Daily will have even more performance based outline to it which will be a nice addition to the Machado line up. But the Melted is so user friendly and does cover a huge range of conditions, if both the Melted and Almond where in production I would take the Melted if I had to have one. Step on tail and it goes vertical with ease pivots around really well, in the same breath if you let it track out it does the nicest flowing cut backs I have done in a long time. Beach breaks to point breaks the Melted likes them all. I just wish I could get a second one in case anything every happens to it. Guess I’ll just have to get the Daily.

I’d like to give a huge shout out to Wazza from Firewire Australia and Garry from Beach Beat Alexandra Headland for hooking me up with this board.

Till next time, I hope the waves are up wherever you are and if you were on the Gold Coast, I hope you got amongst the epic swell over last weekend.